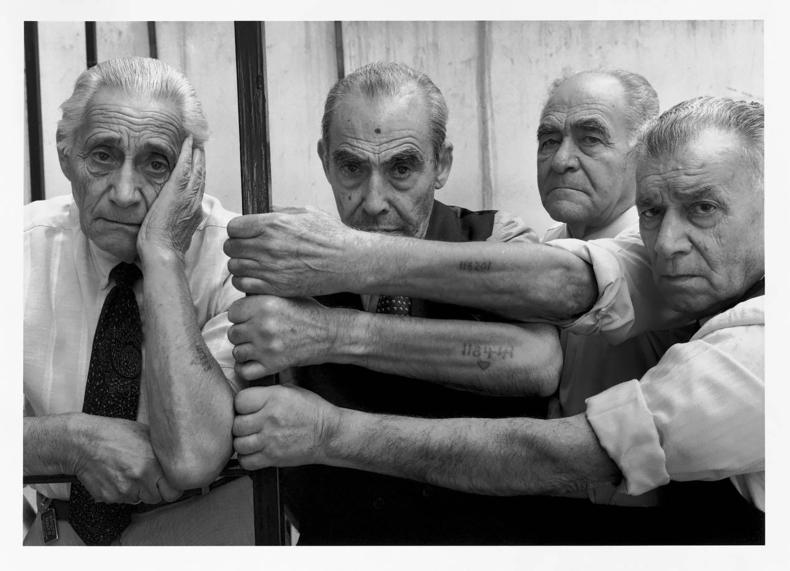 This piece depicts the portrait of four Holocaust survivor men  (Sam Profettas, Mois Amir, Avraham Robissa, and Baruch Sevi) making the associated gesture of rolling up the sleeve and displaying the number tattooed on the forearm to the cameraman. Going beyond the Number Tattoo, however, Brenner manages to extract from his subjects something more than just their portrait: a piercing stare and powerful silence. A bond between four men who, through their aging, stigmatised bodies, tell the story of a community – a long-standing and vivid Jewish community that was almost completely exterminated as a result of the Nazi occupation of Salonika (Thessaloniki).

This photo is part of the photo series Diaspora: a black-and-white visual epic covering a span of almost three decades, during which Frédéric Brenner went on a cross-continental photographic journey aimed at documenting the Jewish community’s life in exile. While each photo stands alone, brought together, the various photographs compose a fragile picture of a heterogeneous collective. For diasporic Jews, time is both linear and mythical. Accordingly, this epic is as much a journey across times as it is a journey across continents: “Everywhere I went, I marvelled at the prodigious memory of Jews. Many of the communities I visited were barely surviving – almost fossils, yet still living – and the remnant that did survive brought to light countless forms of acculturation…I felt I travelled not only across the globe but also through the entire spectrum of time, from antique to post-modern, passing through tribal, medieval and industrial, exploring how Jews survived with a portable identity.”