The Boxer: The True Story of Holocaust Survivor Harry Haft 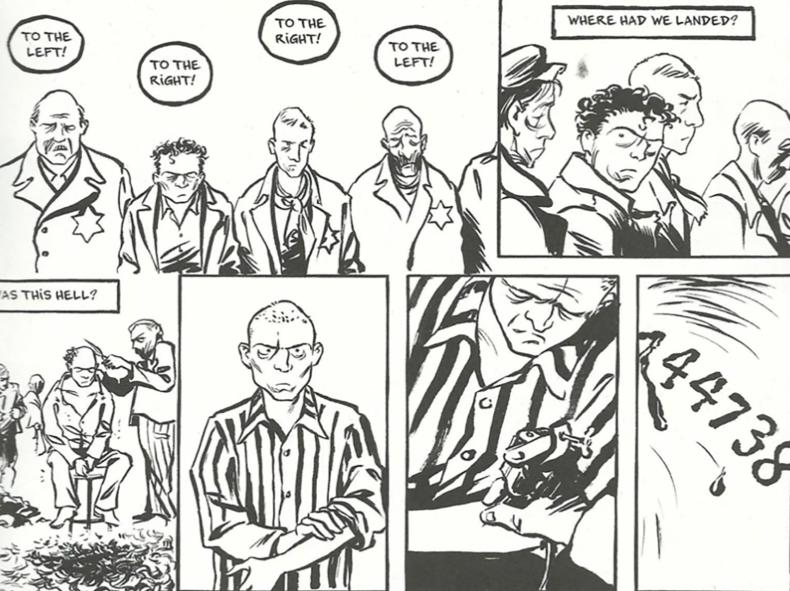 Reinhard Kleist’s graphic novel The Boxer: The True Story of Holocaust Survivor Harry Haft tells the story of Harry (Hertzko) Haft, who survived Auschwitz after being forced to participate in deadly boxing matches in the camp, performed in front of SS men. This sequence describes the registration process in the camp. The Number Tattoo is presented as a crucial element of this transformation into a nameless prisoner. Therefore, the sequence combines three iconic scenes: the selection process symbolised by a row of incoming deportees marked by Stars of David with text bubbles: “To the left! To the right!”, the forced shaving, including the metonymic image of piles of hair, and the tattooing of Haft’s forearm. The six panels contain at least three icons of the Holocaust (the Yellow Star, piles of hair, and the Number Tattoo). In this sequence, the last panel, a close-up of the number on Haft’s arm, constitutes a reference to the liberated children showing the Number Tattoo through indirect use of the image. It is, however, an analogy to the original visual record that serves as a symbol of the dehumanisation process in the camp. Taken out of its original context - the liberation - the gestural icon is evoked for representing an earlier phase of the camp’s existence. Nevertheless, it still illustrates - though in a less specific way - the particular experience of incoming prisoners in Auschwitz.

The scene also corresponds to a later depiction of the number in the graphic novel’s narrative. While the process of forcibly inscribing the number during the registration process in the camp symbolises humiliation and dehumanisation, the number in the liberation scene becomes an identification mark and a symbol of suffering and survival.