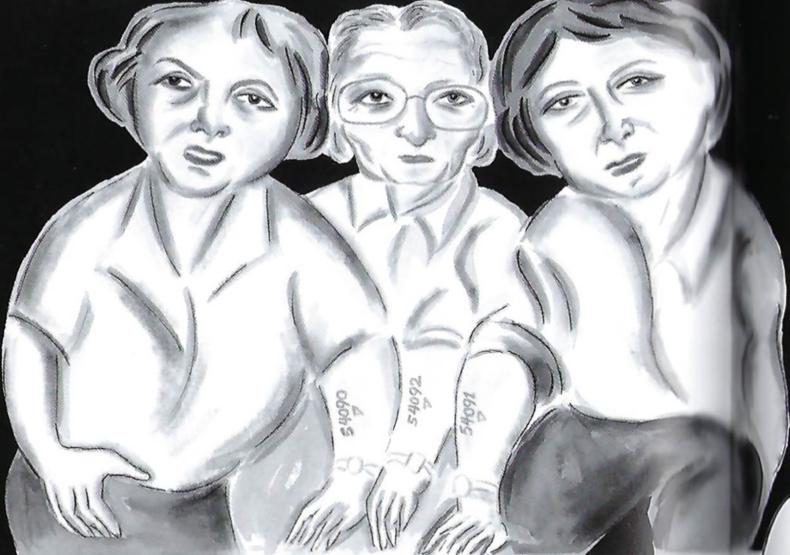 Bernice Eisenstein: I Was a Child of Holocaust Survivors, Riverhead Books, 2006

Bernice Eisensteins I was a child of Holocaust survivors is a memoir about her memories as a child of two Holocaust survivors who met in Auschwitz. This illustration is presented next to a text about her brother’s and mother’s visit to Auschwitz, which made her mother ill. The panel is explained by Eisenstein as an illustration of a photograph of her mother and her sister, sitting together. Referring to this reference, Eisenstein wrote: “when I found this photo recently, I couldn’t believe it. My mother, grandmother, and aunt posed as I had wanted to draw them - sitting close together, wearing watches, their numbers in a row. After I finished, I briefly saw something I’d never in them or never recognised - a kind of innocence, a lightness, as if their arms don’t even carry the mark of the past.”

This illustration is an indirect relation to the original footage, as the three women sit next to each other and show their tattoos. It functions as an allusion to the original footage, as the mother, aunt, and grandmother are depicted in civilian clothes after the Holocaust. The tattoos generically illustrate the three as Auschwitz survivors, therefore, also functioning as evidence of their past. Another dominant visual aspect in this image is the combination of the hand watches and the number tattoos. These symbolise the mortality of the women on the one hand, and the fixity of the tattoos, on the other hand, inscribed on their bodies for the rest of their lives.