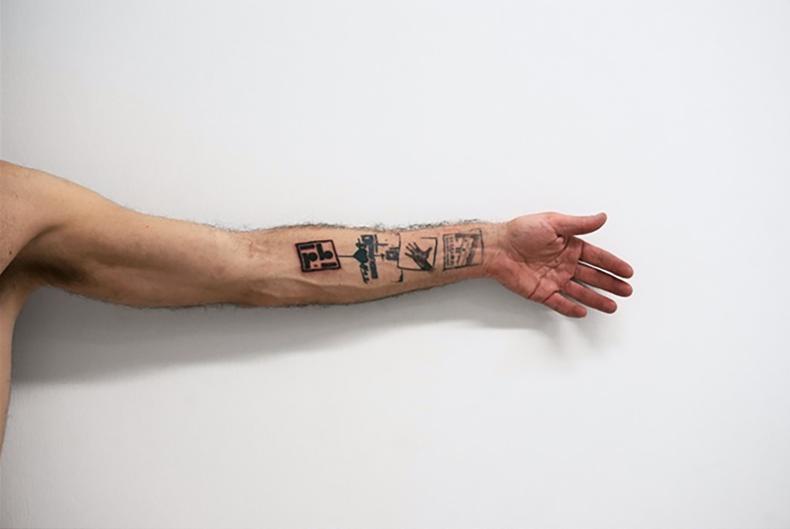 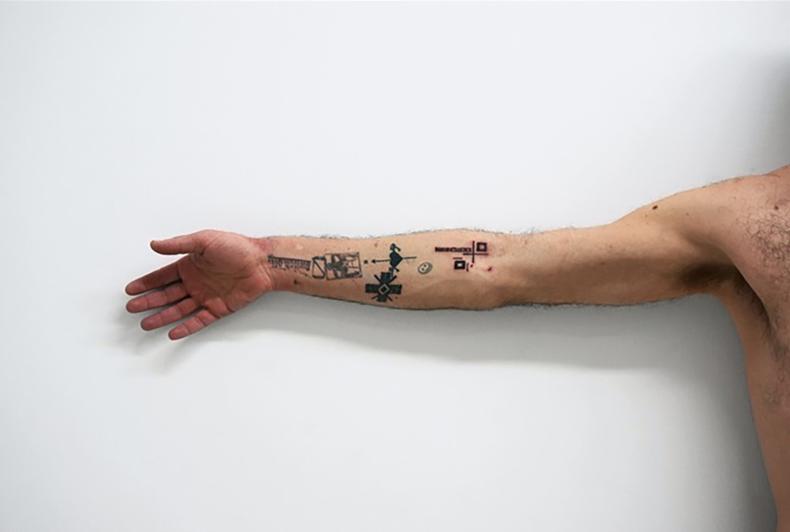 A pair of male arms are outstretched, one to the left and one to the right. The tattoos on both arms are not numbers, yet there is something serial about them: they are tattooed in a sequence, one after the other. In this photo series, multimedia artist Erez Israeli deals with Berlin club (sub-)culture, showcasing the tattoos he made in imitation of the stamps given to him by the gatekeeper of one of the most exclusive clubs in the German capital. But Stempelwald is much more multifaceted than just this reference to parties and nightlife in Berlin, alternative as these may famously be.

Israeli’s artworks engage equally with issues of heritage, memory, identity, and social belonging. Additionally, they often involve working with the body as a unique material that connects the individual and the collective. This is also the case in Stempelwald. Through a compositional analogy with the close-up shot of a Jewish child showing the identification number given to her by the Nazis after passing through selection at the entrance to the camp, the gesture of reaching out an arm rich with tattoos created in Berlin – by a Jewish artist from Israel – retains an indirect use of the historical footage, in the process maintaining a tense dialogue between the past and the present. Alongside the reference to the alternative culture that the city offers and its strict selection processes, Stempelwald also evokes the memory of the Holocaust. It appropriates the Number Tattoo into a new context and simultaneously portrays the transgenerational transmission of Holocaust memory; reducing the Number Tattoo image to this gesture implies that, although more than three generations have passed, the memory of the Holocaust is still engraved in Israel’s – as well as Israeli’s – private and collective Jewish body.