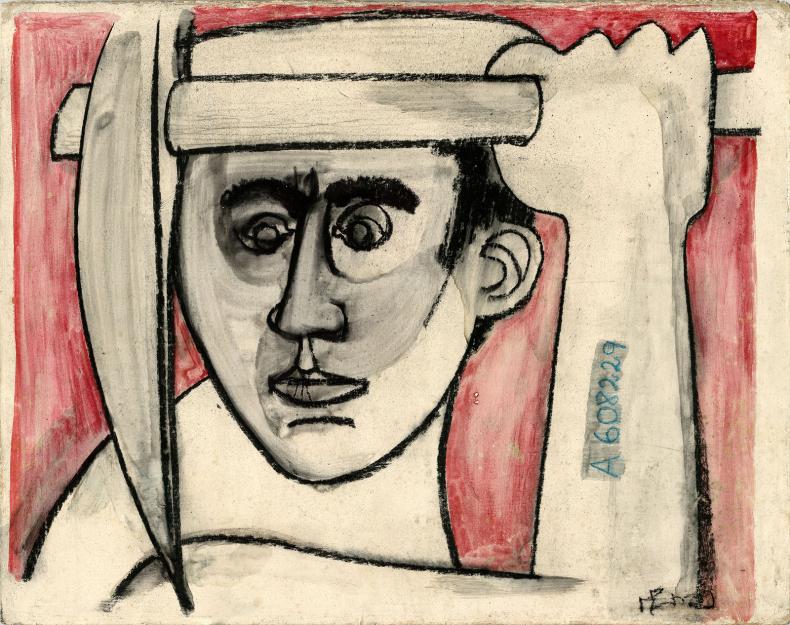 Naftali Bezem was born in Essen, Germany, in 1924 and emigrated to Mandatory Palestine in 1939, just before the outbreak of war in Europe. Despite not personally experiencing the atrocities of the Holocaust (although he did experience the rise of antisemitism in 1930s Europe), Bezem dealt with the Holocaust that befell Europe’s Jewry in many of his paintings, more directly in some cases than others. Auschwitz Survivor Holds a Pickaxe – A-608229, one of the earliest representations of the Holocaust in post-1948 Israeli art, is an apt example. The work depicts the figure of the Auschwitz survivor as a sturdy man who holds his work tool with his tattooed hand. Bezem’s painting constitutes an indirect relation to the historical footage: the Number Tattoo image is appropriated into the Zionist post-1948 realm. Such a representation stands in sharp contrast to the image of the starving inmate as it was captured by the liberators; instead, it reflects the Zionist ethos of “From Holocaust to Rebirth” and points to Holocaust survivors’ aspiration to assimilate into the new Israeli (or Eretz Yisraeli) society.

On the other hand, the combination of the image of the Auschwitz survivor proudly showing his Number Tattoo can also be interpreted as Bezem’s attempt to criticize the hostile attitude that Holocaust survivors often encountered upon their arrival in Israel. From this perspective, the Number Tattoo is used not as a symbol of the Jewish genocide but rather as a symbol of Jewish heroism. This duality is also seen in the red colour used in the background of the painting, symbolic of the bloody past of the camps as well as the colour of the proletariat who works in the construction of the country (therefore, indirectly resonating with the Soviet Union, the liberators of Auschwitz, in another sense).