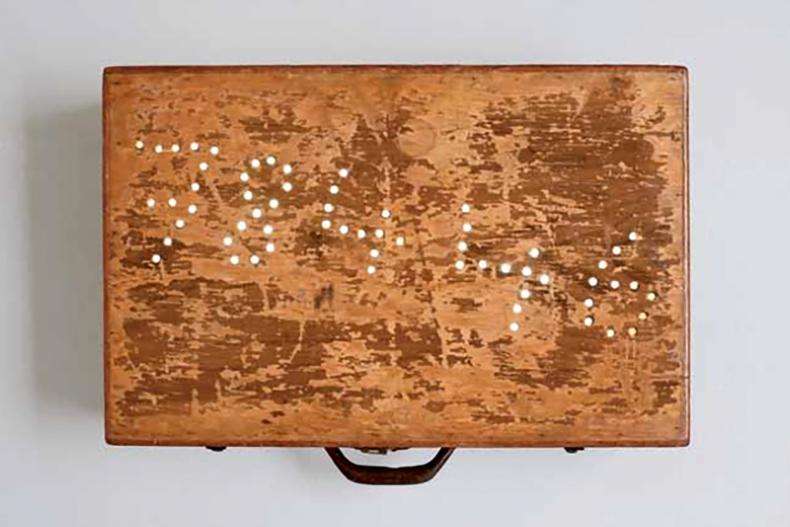 The vast shadow of the Holocaust always hovers above Haim Maor’s art; as a child of Holocaust survivor parents, he could not escape it. Like many second-generation artists, Maor’s works revolve around the presence of this shadow in his life: the intergenerational transmission of the trauma and its effect on his ‘postmemory’ of the war experience, to paraphrase Marianne Hirsch’s well-known term. For Maor, the number tattooed on his father’s left forearm – a recurring motif in the artist’s oeuvre since the 1980s – is a symbol of an inheritance passed on by his father while still alive. This number, though tattooed in the flesh of the father, was engraved so indelibly in the memory of Haim, the child, that it developed an aura of its own, metaphorically as well as figuratively speaking.

Father’s Suitcase features – as the title implies – the suitcase with which Maor’s father arrived in post-statehood Israel and which was found by the artist only after his father’s death. The artist pierced holes that form his father’s ‘Auschwitz number’ and turned the suitcase into a lightbox. The reference to the Number Tattoo image indirectly links Father’s Suitcase with the historical footage. Superimposing the image of the Number Tattoo on the authentic suitcase, which itself functions as a symbol of wandering, associated with the figure of the eternal Jew (as well as being a migrating image of the Holocaust in its own right, its origins likewise found in the Soviet footage of the liberation of Auschwitz) the work manages to navigate delicately between the father’s number and the son’s ‘number’: while the act of piercing recalls the act of tattooing, immortalising the father’s number, the Number Tattoo image is in fact represented by the absence. As a result, the light that emanates from the holes invites a reflection on the elusive nature of memory.