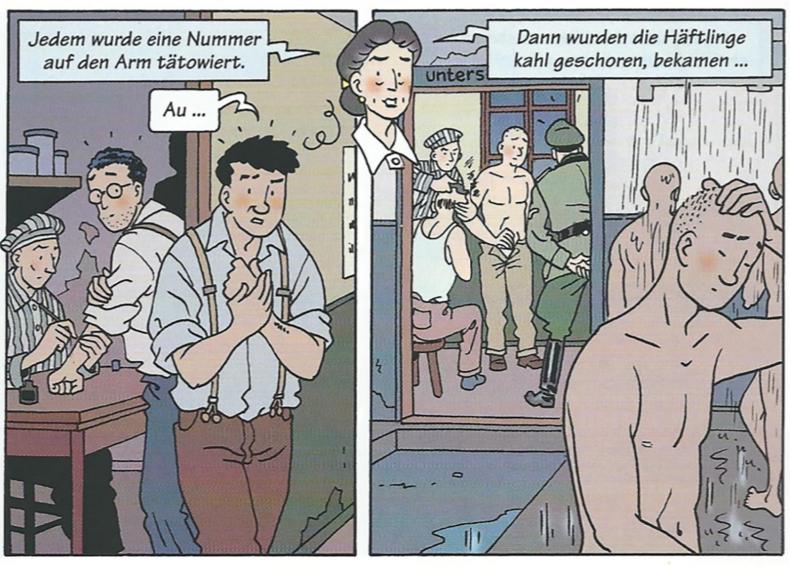 Die Suche (2007) tells the story of Esther and Bob, two Holocaust survivors. The comic book illustrates Esther’s testimony, as given to her grandson Jeroen. The structure of the narrative is biographical, though the book attempts to exemplarily cover typified events related to experiences of persecution, hiding, deportation, and imprisonment.
While the first part of the book focuses on Esther’s story, the second part explores Bob’s memories through Esther’s voice. After Bob’s deportation to Auschwitz, Die Suche describes the registration process. One cadre refers to the Number Tattoo. While the depiction does not explicitly refer to the compositional structure or the dominant gesture in the original footage, the representation is still a form of indirect use that refers in a generally illustrating way to the Number Tattoo as an iconic trope in visual Holocaust memory. As such, it symbolises the process of humiliation, which is explicitly mentioned in the conversation between Jeroen and his grandmother. Shortly after the Number Tattoo is mentioned as a significant part of the collective experience of incoming prisoners, Esther explains that they were “only a number.” This demonstrates the metonymic function of the Number Tattoo as a visual trope that condenses the process of humiliation.