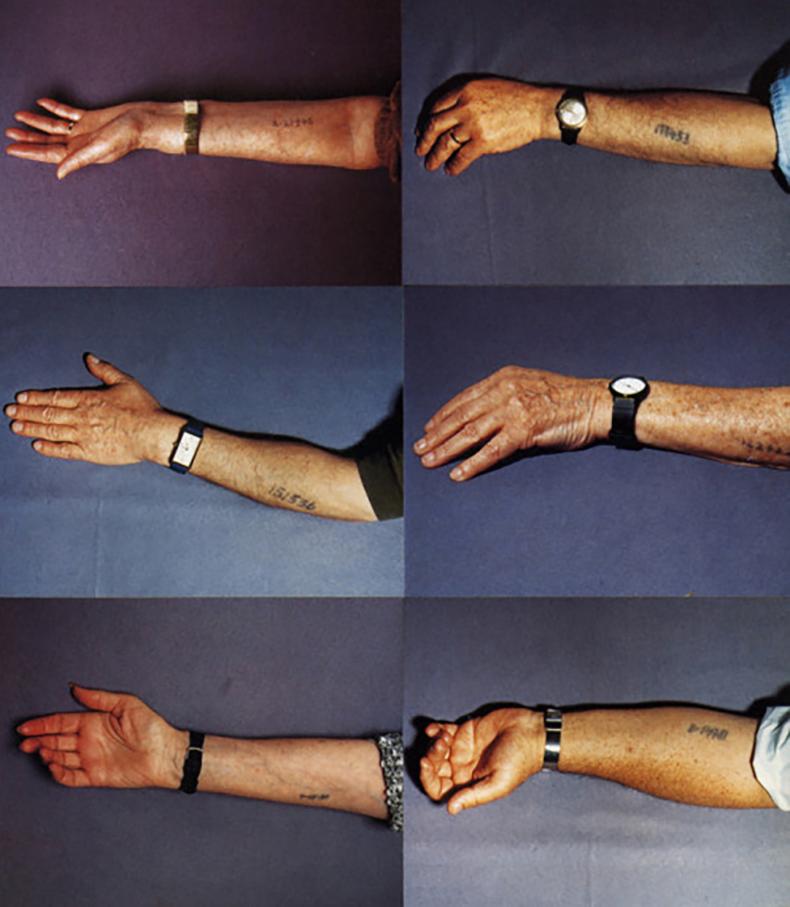 German artist Beate Passow’s Numbers is a series of large-scale photographs, each of which depicts one or several identification numbers tattooed on the forearms of survivors of Auschwitz. The photographs of the Number Tattoo on forearms are evidence of the dehumanisation process that prisoners were forced to endure when they arrived at the camp, stripping the subject of their own identity and turning them into a serial number.

By amputating the arm from the whole body, the artist draws our attention to the identification number that distinguishes each survivor while simultaneously pointing to a destiny they share as survivors of Auschwitz. Always photographed against the same purple background yet adopting a slightly different pose in every photograph, Passow’s multiple images of the Number Tattoo produce an imaginary sense of motion. This undermines the static photographic medium while also referencing the historical footage by creating a temporal continuity: the children who once showed their Number Tattoos to Soviet cameramen are now old men and women. The watch on their tattooed, aging arms reminds us that we, the viewers, are running out of time as we are approaching a post-witness era.

At the same time, the body is used as material for experimentation on the performativity of the un/scarred body, thereby inviting a reflection on the long visual legacy of stigmatised and fragmented bodies in the history of art (from Christian iconography to the work of Bruce Nauman); the display of many ‘floating hands’ as part of the larger series stimulates imagination: the gesture becomes a form of nonverbal communication, which evokes the memory of the Holocaust.