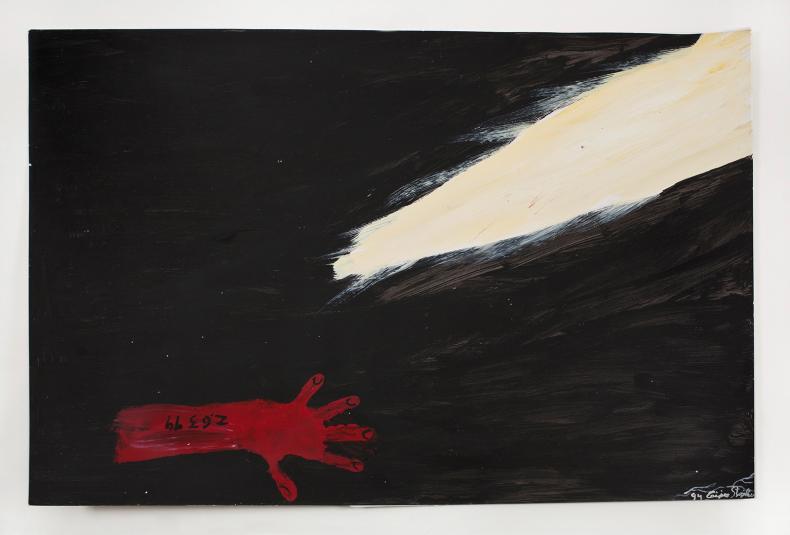 Roma-Austrian artist Ceija Stojka survived the atrocities of three Nazi camps (Auschwitz-Birkenau, Ravensbrück, and Bergen-Belsen) before she was liberated by the Allies at a very young age. Like many Holocaust survivors Stojka kept her wartime experiences to herself for about four decades. However, between 1990 and her death in 2013, in a burst of creativity, Stojka produced more than a thousand paintings and drawings. Using art as a visual means to cope with her own traumatic past, Stojka, an autodidact artist, also drew attention to the story of a victim community, the Roma and Sinti, whose war experiences were marginalised and silenced by the general public of the time, and remain so even today. One such work is Z-6399.

In contrast with her many colourful paintings, in this work, Stojka uses a very narrow palette reminiscent of the colours of the German flag. Evoking the war period through the national colours of the perpetrators, the gesture of reaching out a tiny hand engraved with the Number Tattoo resonates with the historical footage and uses it indirectly. This time, the little girl is the artist herself, and the Number Tattoo is the identification number given to her at the entrance to Auschwitz. The letter ‘Z’ that appears before the serial number indicates her belonging to the Sinti and Roma community ("Zigeunerin" in Nazi racial terminology). The little hand, painted in blood-red, longs for touch, unsuccessfully; towards it, a hand is indeed outstretched that has no Number Tattoo but also has no palm. This composition immediately suggests one of the most iconic images in Western art history: Michelangelo’s The Creation of Adam, part of the larger fresco painting in the Sistine Chapel. In Michelangelo’s account, Adam, the first human being, was created in the image of God at the touch of a finger; Z-6399 implies the absence of the Almighty in the Holocaust and in Auschwitz in particular. Having no fingers, the promised touch is destined to fail.