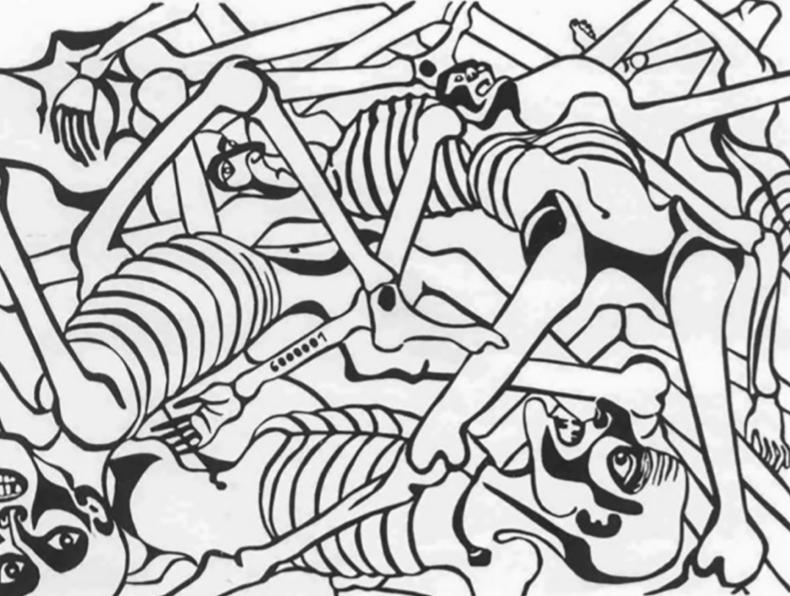 Corpses is part of the series of woodcuts 6000001 created by Moshe Hoffman: a Holocaust survivor artist who, with his family, arrived in post-statehood Israel in 1949. This piece is an example of how one artwork can have relations with several images from the liberation in parallel, consisting as it does of a couple of ‘migrating images.’ As its title indicates, Hoffman’s work deals with the figure of the victim, the one who did not survive the atrocities of the camps. The composition is reminiscent of the piles of emaciated corpses recorded by the Allies upon the liberation of the Nazi concentration camps, in particular, the famous photographs from Buchenwald and Bergen-Belsen.

At the same time, Corpses also indirectly uses the historical footage from the liberation of Auschwitz; the Number Tattoo appearing on the forearm of the central figure in the woodcut resonates with the sequence of the children showing their tiny, tattooed forearms to the Soviet cameraman. In contrast to this footage, Hoffmann arranges the composition in such a way that the gesture of revealing the tattooed forearm is not indicating survival but becomes an ‘act’ of a dead body. At the same time, this composition may remind the viewer of the act of crucifixion (as a famous photograph of a corpse from Bergen-Belsen does), indicating the artist’s attempt to reveal the sanctity of the dead. Nonetheless, the identification number of six million and one, which appears as the Number Tattoo, is, of course, symbolic: on the one hand, it commemorates the six million Jewish victims of the Holocaust, while on the other, it presses the viewer to ask who the singular extra victim is. Does this additional ‘one’ refer to God who failed to save the Jewish people? Or is the additional ‘one’ the artist himself, who has perhaps lost his belief in Divine redemption? Maybe it’s the viewer who carries destiny in partnership with the dead? While the answers to such questions are open to interpretation, the choice of the medium of woodcuts also forges a symbolic relation to the historical footage: the carving of an image into the surface with a knife can be seen as a metaphor for tattooing a number in the flesh.