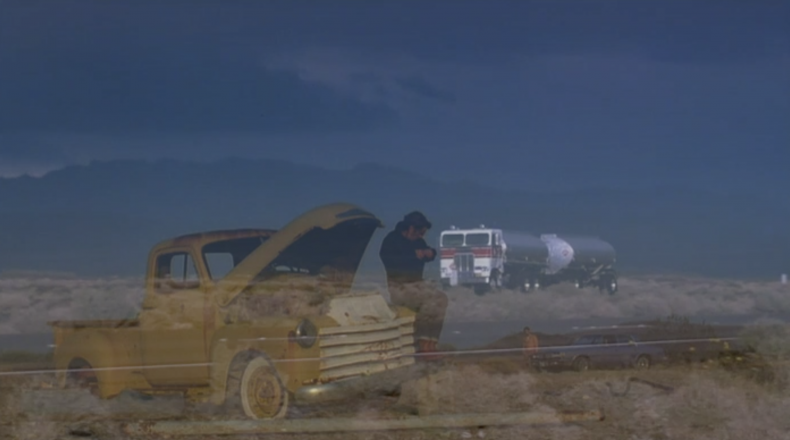 Through the images and sounds of Wim Wenders’ PARIS, TEXAS (1984) and Percy Adlon’s BAGDAD CAFÉ (1987),1  two films that were conceived of by German filmmakers and shot in the US with an international cast and crew, this video essay considers a particular view onto the American landscape and its historical, mythological associations—that of the foreigner, the European, the German visitor to American spaces, places, and icons, whose representations have long circulated abroad. BAGDAD CAFÉ’s story directly involves an encounter between two women from different worlds: Bavarian tourist Marianne and American gas station owner Brenda, the matriarch of a struggling black family, living in the middle of nowhere. The film begins with blunt clashes of national, cultural, and ethnic stereotypes and prejudices, which eventually (in an oversimplified manner, one might argue) get resolved by “establishing a new Heimat in the international community of the West.”2  PARIS, TEXAS’ plot, based on a screenplay by Sam Shepard (“a quintessentially American playwright”3 ), does not explicitly focus on transatlantic relations, and yet the casting of its two female characters with European actresses (French actress Aurore Clément as Anne, who is French in the film as well, and German Nastassja Kinski as Jane, an American woman with a Southern accent) entails a Euro-American dynamic. Both films reveal many of the characteristics that Hamid Naficy ascribes to “accented films”: they are “simultaneously local and global”; they involve displays of epistolarity (“the use of the formal properties of letters and telephony to create and exchange meaning”); they are “deeply concerned with territory and territoriality”; and they highlight “transitional and transnational places and spaces, such as borders, tunnels, seaports, airports, and hotels and vehicles of mobility, such as trains, buses, and suitcases”,4  which Marc Augé famously refers to as “non-places”.5

While the romanticized idea of America as the land of hopes, dreams, and personal freedom has lost much of its power in the last few decades, it was pervasive in the postwar decades. My parents and their siblings, who grew up in the forties, fifties, and sixties, have told me at length that American popular culture and consumer products were the epitomes of “coolness” during their formative years, and that they dreamed of taking vacations in the US—conquering route 66 by motorcycle or driving down the West coast in a VW camper van. They are of the same generation as Wenders and Adlon, and some of them eventually traveled to the US around the same time as these two films were shot. These collective escapist dreams shine through PARIS, TEXAS and BAGDAD CAFÉ. As such, Peter Lev argues that “Euro-American art films are attempts at a synthesis,”6  and that “Wenders’ work is specifically about the absence of a positive German culture in the post-Nazi period and the use of American culture as a substitute.”7

Yet even I, born at the very end of the cold war, was obsessed with the American imagery I knew from films and TV shows. I dreamed of the skyscrapers of New York and of going horseback riding in Arizona or Colorado, hoping to explore the kind of untouched wilderness that does not exist where I grew up. Even now that I have lived in the US for many years and have gained a much more nuanced, critical, and experiential sense of this country, I often find myself falling back into the perspective of a curious outsider taking in sceneries that touch upon a pool of iconographic impressions and adventurous dreams that are stored deeply in my conscious and subconscious memory. In PARIS, TEXAS and BAGDAD CAFÉ, I see a postmodern mix of personal, collective, and multi-generational fantasies on the one hand, and the indexical documentation of the film crews’ visits to the “new world” on the other.8 This video essay explores and reflects on the American West in those two films from both a personal, and a scholarly perspective.